The Fairway Market Indonesia Sumatra is the third Fairway Market coffee I'm reviewing here, previously I reviewed the Fairway to Heaven Blend and the Fairway Supreme Blend. The Indonesia Sumatra is quite a contrast from the other two, in particular when comparing it to the FSB.  It's a dark roast coffee that hits you in the gut, in a good way, just by taking a whiff of the beans. Take a look at the color of the beans! 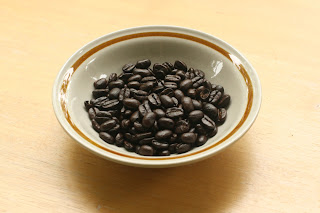 Here's the Fairway Supreme Blend so you can compare. 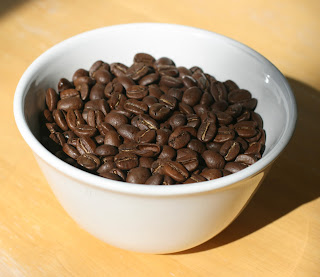 I only had a very small sample, three days worth of drinking, of the Indonesia Sumatra, that's why there is a small amount of beans. I almost ground up the last scoop of beans before I realized I had not taken a picture! Three days is a good amount of time to get an overall feel for a coffee. It leaves a little bit of time to experiment with the water-to-bean ratio.

As mentioned it's a dark roast. I'm generally not too much of a fan of dark roasts, so while I would consider this a good coffee it's not something that I would go to for an everyday cup. It very well might appeal to people who like a strong cup of coffee, but not me. What did make it drinkable was a firm coffee aroma, flavor, and after taste, but without a harsh bitterness that can sometimes be present in dark roasts. I normally brew just under the 6 cup mark on my Cuisinart DCC-2000, but the FMIS would probably get me the same jolt in about 4 cups.

Would I have it again? Probably not. It was a good quality coffee, but not my cup of tea coffee. ;)