It's been a while. Don't worry. I didn't give up coffee. Let's get into the review!

I have a confession to make: I am not a Starbucks fan. Even more so, I actively try to avoid Starbucks. There is something about the vibe of the store that irks me. That and the super sugar'ed up drinks. Oh and why can't they just call it small, medium, and large? Although their nitro cold brew is some good stuff. I haven't gone into home nitro yet, but will give a home cold brew review at some point.

With that said. People know I love coffee. So when gift cards are exchanged, I always seem to get Starbucks. Recently I realized that I have a small retirement account's worth (very small retirement account) of Starbucks gift cards piling up. I thought about re-gifting them or selling them, but then thought I would explore making Starbucks at home. This is actually my second bag of Starbucks. I didn't do a review for the other, but may come back to it. 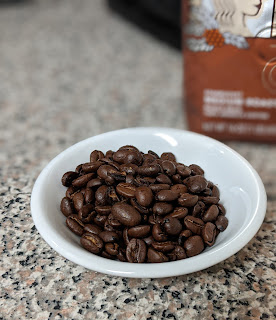 Starbuck's describes Siren's Blend as citrus and chocolate. I can catch the citrus, sort of a mild orange/lemon hybrid minus the acidity you might get with citrus and/or coffee.  To me the chocolate comes through more like the creamy melted goodness of a Hershey's chocolate bar that was left in your car. Instead of throwing it out, or putting it in the fridge, you attempt to eat it. Eat being a relative term, it's more like lots of licking and then storing a chocolate snack under your fingernails for later that day. 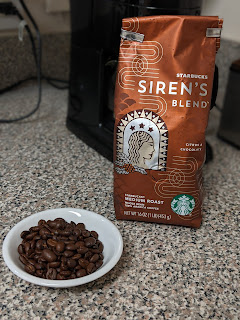 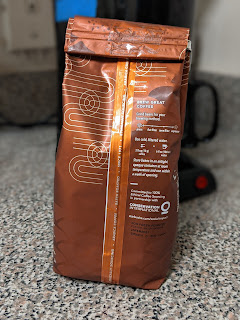 Anyway, back to the coffee. I'm pleased with it. It seems super sensitive to the bean/water ratio. I tend to measure out 5 tablespoons of beans and up to the four cup in my coffeemaker. With Siren's Blend if I happen to be a couple beans shy, it turns out rather watered-down. Making it more like five heaping tablespoons brews a better cup. It is a medium roast 100% Arabica coffee. Much to my surprise, I'd buy it again.