Oh boy oh boy! I'm now two Trader Joe's coffee's in and oh boy oh boy! I think I've hit home runs with both of them! The last one I reviewed was the Costa Rican Tarrazu, the Ethiopia Peaberry is equally as good and yet another fantastic coffee. I'm pretty sure that Trader Joe's is now my go-to place for getting coffee. 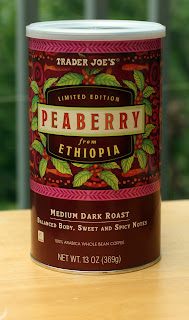 I've had peaberry coffee before. The last was Barnie's Tanzanian Peaberry in November of 2011, no review on that one as it was well before this blog existed. According to the wikipedia and confirmed by the back of the packaging, peaberry coffee is the result of only a single seed (bean) being fertilized rather than two seeds that face each other and flatten themselves out. However them come about, they sure do make a lovely cup of coffee. 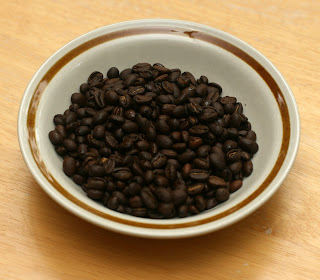 Having just tried a medium dark roast it didn't take too much experimenting to find a bean/water ratio that worked for this. I was pretty much spot on with the first brew, now just under a week ago. There is an even more colorful bouquet of flavors from the Ethiopia Peaberry than the Costa Rican Tarrazu. Although both are utterly fantastic coffees! I would describe the Ethiopia Peaberry as having slightly more smoothness to both the taste and after taste.

This is going to be a difficult coffee to move on from. I love trying new beans and experiencing the different flavors out there, but this one is stellar and something I would return to without hesitation. 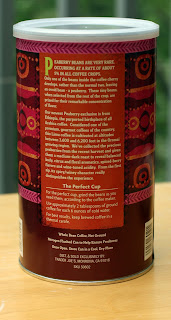